Look at what Tokidoki (Tattoo) Barbie is selling for now! 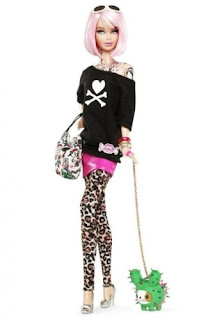 Have you checked out the price of the Tokidoki Barbie lately?


This controversial gold label doll was released for $50.00 on October 13, 2011 with a limited edition of 7400 worldwide.  Simone Legno designed the doll.  It is now selling in the hundreds and sometimes even thousand dollar range.
If you need a refresher course about this doll, she came in a pink miniskirt, logo leggings, black top which featured a skull heart and bones design.  Her accessories included bracelets, a belt, tall silver heels and a large bag.  She had a pink bob haircut and held a leash that was attached to her cactus friend, Bastardino.  And finally, the reason she was so controversial: the tattoos she had all over her chest, back, and arms!
Are you thinking “I should have bought that girl?”  Probably, because I did!  But for most of us, collecting Barbie isn’t about the dollar value and what she’ll be worth someday; it’s all about how much joy our collection brings us!  But if you are curious, as I was, the highest price I see on eBay today is a signed, autographed doll for $1500.00.  The average price is around $500.00, with some sellers asking less and some asking more.