Barbie's of the Month: Newport Barbie and Yellowstone Kelley

The #7807 Newport Barbie and #7808 Yellowstone Kelley were towards the end of the vintage years and  were only produced in 1974.  After the big boom of the sixties, with the Barbie doll and other products making huge profits for Mattel, the seventies became quite a different story.
Problems started arising in 1970. There was a devastating fire which destroyed Mattel’s Mexico plant. July 1971 brought the crippling 130 day dockworkers strike, which stopped shipments from coming into the United States from Mattel’s plant in Asia.  By 1973 Mattel’s stock had fallen, and there were understandable concerns when it was discovered that Mattel had released false reports over a two year period, uncovering a thirty-two million dollar loss.  This eventually prompted an investigation by the Security and Exchange Commission. By 1975 the investigation was complete, and Ruth Handler, the original creator of Barbie and original owner of Mattel (with her husband Elliot), were forced to resign and leave the company. Seymour Rosenberg, who was the V.P. and C.F.O. of Mattel, was fired.  Ruth and Seymour pleaded no contest to the S.E.C. charges, and their sentences (which had included jail time) were reduced to fines and five hundred hours each of community service work every year for five consecutive years.
﻿
Mattel was looking for new ways to return to profitability, but by 1973 the quality of the Barbie doll was deteriorating. No longer did we see “real eyelashes”, and they began using more economical vinyl to make some of the dolls. They were looking for fresh ideas to boost sales. The “fitness craze” boom had started, and it seemed like everyone was doing something athletic. Whether it was aerobics, jogging, biking, or just working out, it was the thing to do! And what a perfect time to release these new energetic sun-tanned dolls!
﻿﻿﻿﻿﻿﻿﻿


Newport Barbie and Yellowstone Kelley are both extremely hard to acquire. They are part of the “Sports Set” dolls which are all very difficult to find. There were only four sets of these active teens made; Newport Barbie, Sun Valley Barbie, Sun Valley Ken and Yellowstone Kelley. Yellowstone Kelley (with long, straight red hair with a suntan) was actually the only “new” doll in this line, as Sun Valley Barbie and Ken and Newport Barbie were all Malibu dolls from 1973 dressed in different clothes.
﻿﻿
﻿
﻿
﻿
﻿﻿﻿﻿﻿﻿﻿﻿﻿﻿﻿﻿﻿﻿  Newport Barbie, who came with long blonde hair and sunglasses worn on top of her head, was the exact same doll as the #1067 Sunset Malibu Barbie from 1973, who was stamped with the “Made in Taiwan” marking. She has a twist-n-turn waist with bendable legs. In 1975, Mattel released the same line of sun-tanned Malibu’s who were dressed in Olympic attire, just in time for the 1976 Olympic Games. 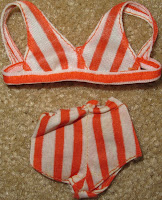 Newport Barbie came with two outfits in the box; a red and white striped bikini and a pants ensemble that included a white sailor style top with red trim along with white wide-leg pants with a built-in white belt with red stitching. Her set also had a white windsurfing board with a red sail (a few had a pink sail) for enjoying the beach in sunny Southern California.
Yellowstone Kelley wore a red long sleeved top with white polka dots and blue and white striped shorts.  She also had a pair of pants in the same fabric.  She wore white knee socks and white tennis shoes.  She came equipped with all the gear she needed for camping; a back pack, yellow sleeping bag, camping mattress, camp stove, cooking utensils, pots and pans, and a brush and comb for her long hair.

Newport Barbie and Yellowstone Kelley came in two different style packages. They were almost identical, but one had the large Mattel logo right under the words “the Sports Set” on the front of the package, and the other had the logo in the right hand corner of the package.  Whichever package you find these suntanned beauties, they'll always be a fun one to add to your collection.
Happy Hunting!