This month I thought I’d showcase the #1144 Growin’ Pretty Hair Barbie dolls that are quite popular with collectors. 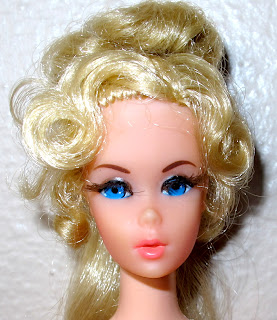 Growin’ Pretty Hair Barbie arrived on the market in 1971 and was only available two years.  She came in two blonde versions.  Both had real eyelashes and a retractable pony tail, but with different hairstyles.  The 1971 version parted her hair on the side. The 1972 version pulled her hair back in the front. 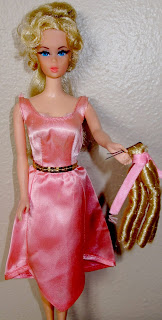 
Both dolls had completely different style dresses.  The 1971 doll wore a beautiful pink chic satin dress which fell to a “v” shape at the knee.  Her dress also included a built in gold trim belt. She had matching pink shoes.
﻿

In the box came two additional hair pieces, styling booklet, hair pins, barrette, comb and brush.  The 1971 version had pink ribbons tied to the extra hair pieces and the 1972 version had blue ribbons. 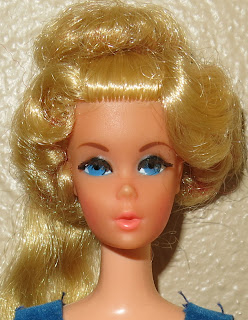 The 1972  doll is a much harder Barbie to acquire.  In the first three months of this year, eBay has had only two of these dolls for sale, and of course both sold!  She is extremely hard to find mint in the box.

I think the  1971 version of Growin’ Pretty Hair Barbie is the prettier of the two, but  the 1972  Barbie takes me back to the time period when I wore a very similar type of her peasant style dress. And it seems like only yesterday!

For a little more nostalgia, check out the link below to see the commercial that was aired when she debuted.  I’m sure you’ll agree, it’s so much fun to watch!
http://www.youtube.com/watch?v=94twktaiqRw