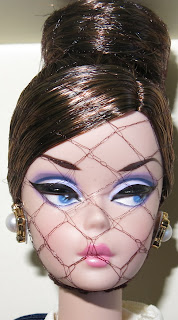 I thought I would shift gears a bit this month and feature a current Barbie doll.  The 2013 Boater Ensemble Barbie who is part of the Barbie Fashion Model Collection and a Barbie Fan Club exclusive gold label doll.
Here’s some background about the glamorous Barbie Fashion Model Collection if you aren’t familiar with it.  These exquisite high-quality dolls are made of Silkstone®, which is a superior vinyl type product.  This was a big breakthrough for Mattel.  The dolls look and feel much like porcelain dolls but are heavier than your standard Barbie’s.  The actual sculpting of this series was taken from the original #1 ponytail doll that was released in 1959.  Unlike most other Barbie’s, these dolls stand in a model pose that is permanent. 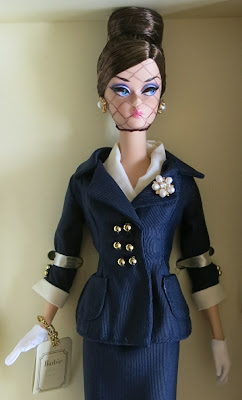 Their "couture style" clothing ensembles are made of fine fabrics, much like the early vintage Barbie doll clothes.  Attention to detail is extremely important; from the tiny handcrafted jewelry to the miniature accessories which complete each outfit.  Their hair is styled by hand and each doll that is released has a distinctive hair do.   Robert Best is the Design Director and he and his team, has created some amazing dolls.
The first two dolls debuted in 2000. They were the beautiful blonde and brunette Lingerie Barbie’s.
The new 2013 Boater Ensemble Barbie was released in February of this year.  She has a limited edition of just 5300 worldwide which it is noted on the back of her box.  She wears a tailored sleeveless dress featuring a tight pencil skirt with white bodice, and a double-breasted matching jacket that is trimmed with gold buttons.  Her ensemble also includes short white gloves, pearl earrings, a matching brooch, an extravagant boater’s hat, black textured stockings and navy and white pumps.  She also has her “Barbie Fashion Model Collection” hang tag.  She is undeniably beautiful!

﻿﻿﻿﻿﻿﻿
I’m almost an exclusive vintage Barbie collector, but since 2000 when the Fashion Model Dolls were introduced, I couldn’t help myself but to buy a few of these stunning Silkstone creations to add to my group. I love the Fashion Model dolls because, like the early vintage Barbie’s, they embody sophistication, glamour, elegance, and style.
﻿

So if you haven’t treated yourself to at least one member of this prestigious collection, you should!  You’ll be surprisingly pleased with the quality of these beauties.