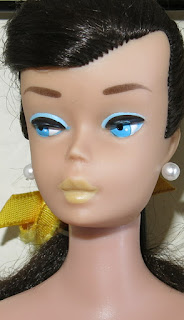 The exquisite European Swirl Barbie doll was released in Europe in 1964 and is a very challenging doll to find.  She looks similar to the Swirl that was available in the U.S. market, but there are slight differences.
Barbie dolls from Europe all have some variances from their U.S. counterparts.  It can be anything from a different body to something as simple as a part in her hair.
An illustration of a major distinction would be the 1967 twist ‘n turn Barbie marketed in Germany.  She was actually called the “German Bend Leg Barbie” because she came on the American Girl Body (marked with the raised markings "©1958/Mattel, Inc./U.S.Patented U.S. Pat. Pend Made In Japan").  She wore a one-piece American Girl swim suit that had a striped top and turquoise bottom. But she did have the same long pretty hair style that the U.S. twist n’ turn dolls are so famous for.
There are other dolls that look completely different.  The German Francie doll from 1972 is a perfect example.  She looks nothing like any of the Francies from the U.S.

A slight variance could be found on the side part Bubblecut Barbie. This doll too was not available in the U.S., but she is so similar to the U.S. version that many people have a hard time determining whether they have a true side part doll.

The European Swirl Barbie dolls came in a one-piece swim suit that was white with shiny gold stripes and had a zipper in the back. It’s the identical swim suit you would see on the Fashion Queen Barbie doll from the U.S., but without the turban hat.  I think it is a much prettier suit than the one piece red suit that the American Swirl and the later issue Ponytail and Bubblecut Barbie’s are known for.  My brunette seems to have just a bit longer ponytail too.
Both versions (The European and U.S.) have the same Barbie/Midge straight-leg body and body markings. They both came in the same identical Barbie Box too.
You can see more of these variations on my web site:
www.MyVintageBarbies.com
As my collection grows each year, I’m hoping to acquire more of these beautiful dolls from Europe and other faraway places.  I hope you find yourself with a few too!
Happy Hunting!
Posted by Marie at 8:06 AM 6 comments: