﻿﻿﻿﻿﻿﻿﻿﻿﻿﻿﻿﻿It’s the night of ghosts, goblins, and other little creatures that come knocking on your door, with the expectations of tasty treats being dropped into their plastic pumpkin buckets.
﻿﻿ ﻿﻿﻿﻿﻿﻿﻿﻿
﻿﻿﻿Barbie also enjoyed Halloween back in the day.  She dressed up in her first official Halloween costume that was introduced in 1963, and was simply called “Masquerade”. Ken and Skipper had the same attire with the exact same name too, but Skipper's wasn’t available until 1964.
﻿﻿﻿﻿  ﻿﻿﻿﻿﻿﻿﻿﻿﻿﻿﻿﻿﻿﻿﻿
﻿﻿﻿﻿﻿﻿﻿﻿﻿﻿﻿﻿﻿﻿﻿﻿﻿Other Halloween Worthy costumes on the marketplace in 1964 was Cinderella and Poor Cinderella, Guinevere, Arabian Nights, and Red Riding Hood and the Wolf.  Ken had his options too; The Prince, King Arthur, and Arabian Nights.

In the past seventeen years many Halloween dolls have popped up in stores for children of all ages.  Most of these dolls came in pink label boxes, and are not considered highly collectible.  The very first Halloween Barbie was the 1996 Happy Halloween Barbie and Kelly Gift Set, which was a Target exclusive.  Target continues to release new dolls year after year.  Other stores, such as Sears and select grocery stores, also had Halloween dolls available on their shelves.  I find these costumes to be so much fun to dress our vintage dolls in!
﻿
﻿﻿

﻿﻿
The newly released pink label doll, “Wizard of Oz Wicked Witch of the West”, is another doll that would certainly fit the bill for Halloween.  There have been several versions of this doll over the years.
﻿﻿ 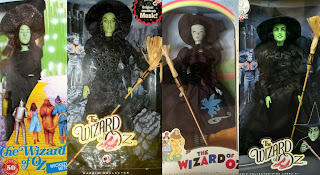 The only three gold label “collector” dolls released specifically for Halloween were all designed by Bill Greening, who is one of the major creators for Barbie.  The first was the 2011 Halloween Haunt Barbie (a Barbie Fan Club Exclusive) from the Holiday Hostess Collection.  Ghost Barbie Doll (2012) and Vampire Barbie Doll (2013), both from the Haunted Beauty Series as well as part of the fantasy series, were offered only as a Direct Exclusive, and not available in stores.  Today these three dolls are the most sought after of all the Halloween Barbie Dolls on the market.


If you browse through the many dolls that have been available over the years, you will doubtlessly find some others that will fit the bill which are not considered official Halloween dolls.  Remember, imagination is what Barbie is all about!
Have a safe and Happy Halloween!﻿﻿
Posted by Marie at 9:02 AM 4 comments:

Barbie of the Month: Miss Barbie

Fall is in the air; Halloween is just around the corner; and what better month to feature the scariest vintage Barbie doll Mattel ever released:  Miss Barbie from 1964.


Miss Barbie (Stock #1060) was the very first and last doll to have blue “sleep” eyes that open when she’s standing up or close when she is lying down.  Her head was made of hard plastic with brown molded hair like that of the Fashion Queen Barbie.  She wore an orange vinyl headband rather than blue.  She came with her own set of wigs (brunette flip, blonde pageboy and red bubble cut) and a white wig stand. 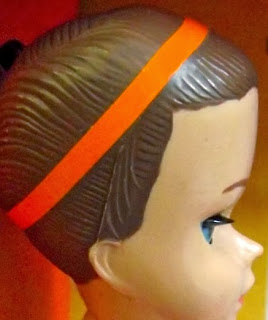 She wore a pink one piece swim suit with a pink fringe swim cap that had gold glitter dots on it, and she completed the outfit with matching pink open toe heels.   Her swim suit came in three variations; pink with printed dots on the fabric, a pink suit with raised gold glitter dots, and a solid pink version without any dots. 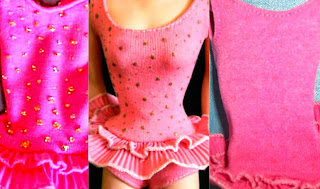 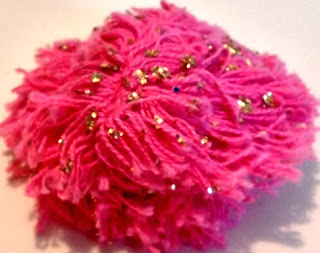 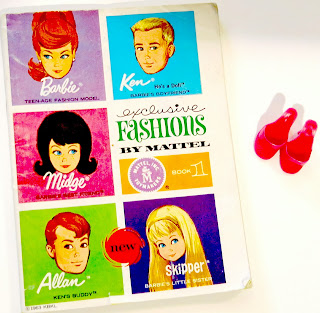 When you find this doll on the secondary market, she usually has some sort of melt marks due to a chemical reaction resulting from her wigs being left on her head too long. 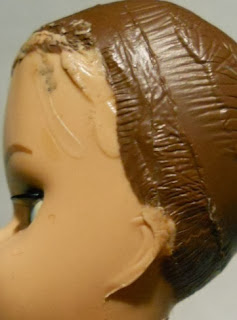 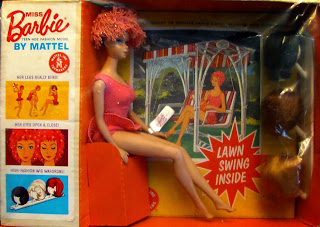 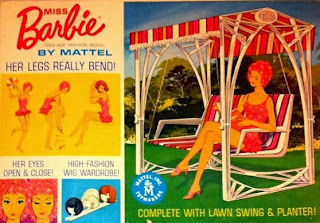 The swing was also sold separately in a set called “Go Together Lawn Swing & Planter” (#4011).  In the set was the swing with cover, planter, radio, and two magazines to read.  There was also a "Barbie Go-together Gift Set" (#4005) that included the swing as well as living room furniture. 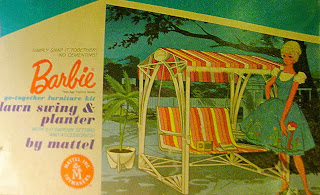 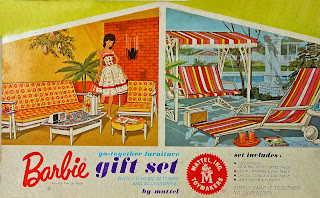 1964 was the first year Mattel released Barbie with bendable legs.  She has the same body as the first issue “American Girl” dolls (1965), but with a slightly smaller neck knob, which was needed to fit her newly constructed head. There were weights in her eyes that needed additional room.  Her head is attached with a black rubber O-ring which is usually lost if her head is found without the body.  The rubber in the O-ring is often found deteriorated due to age.  Both bodies are marked with the engraved intaglio markings on their bottoms which read: ©1958/Mattel,Inc./U.S. Patented U.S. Pat. Pend Made In Japan.


An extremely rare Miss Barbie head that can be found from time to time are unpainted and were never sold to the public. 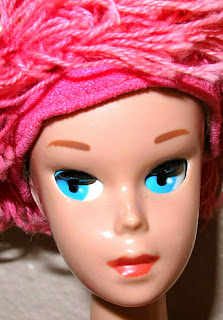 Unfortunately Miss Barbie didn’t sell very well, even though she came in such a great set.  Kids seemed to think she had a scary face and were afraid of her!  They also didn’t like how hard the face felt.  She was only on the market for one short year, which makes her harder to acquire.