Barbie of the Month: Julia


Julia, the second doll in the Barbie line to be fashioned after a real live person, debuted in 1969.


This pretty lady was based on Diahann Carroll’s character from the NBC television comedy show “Julia”, a nurse and single widowed mother living in Los Angeles working and raising her young son Corey.  She was the first African-American actress to star in her own television show.  The popular sitcom ran from September 1968 to March 1971.


Julia (stock #1127) came with a twist ‘n turn body, bendable legs, rooted eyelashes, and was made from the same head mold as Christie.

In 1969 the talking version of Julia (stock #1128) was also released.  She had bendable legs and rooted eyelashes as well.  To hear her talk, simply pull on her string on the back of her neck, and the voice that would speak back to you would be that of Diahann Carroll.

Talking Julia wore the same outfit the entire time she was on the market. It was a one piece flashy glittery gold and silver jumpsuit with matching attached belt and hard to find glittery gold open toe heels.

Julia’s hair style remained the same until 1971.  The twist-n- turn dolls all had short black straight hair, which sometimes oxidizes to a pretty red color.  The talking dolls released in 1969 and 1970 had the same straight hair too.  In 1971 Talking Julia’s hair changed to a fuller curly cut, and her skin tone was darker as well.

Julia was the same size as Barbie, so she shared her entire wardrobe.  She did have four outfits that were exclusively made for her; #1751 Leather Weather, #1752 Brrr-Furr (which came in lime green or the hard to find red variation), #1753 candlelight Capers, and #1754 Pink Fantasy.  All of these were available from 1969-1970.

Julia only had one gift set, a Sears exclusive called “Simply Wow” (stock #1594) which was released in 1969. The boxed set included a Talking Julia doll dressed in her original outfit, a blue knit dress with white satin bodice that had a six tier gold braided trim at the waist. There is one layer of trim around the neckline too.  A matching blue waist length jacket with gold trim and blue chunky heels completed the set.  The set originally sold for 9.99 in the Sears Catalog.

40 years later in 2009, a reproduction of the first 1969 TNT version was released in honor of Barbie’s 50th anniversary.

Celebrity dolls continue to be a popular item with collectors, and there are new ones added to the Mattel family of Barbie’s quite often.


Barbie’s latest adventure takes her to Southeast Oregon, one of the most remote and non‐touristy areas of the state.  This trip didn't feature lush hotels, amazing restaurants, and flashy places of interest. This vacation was everything but that! 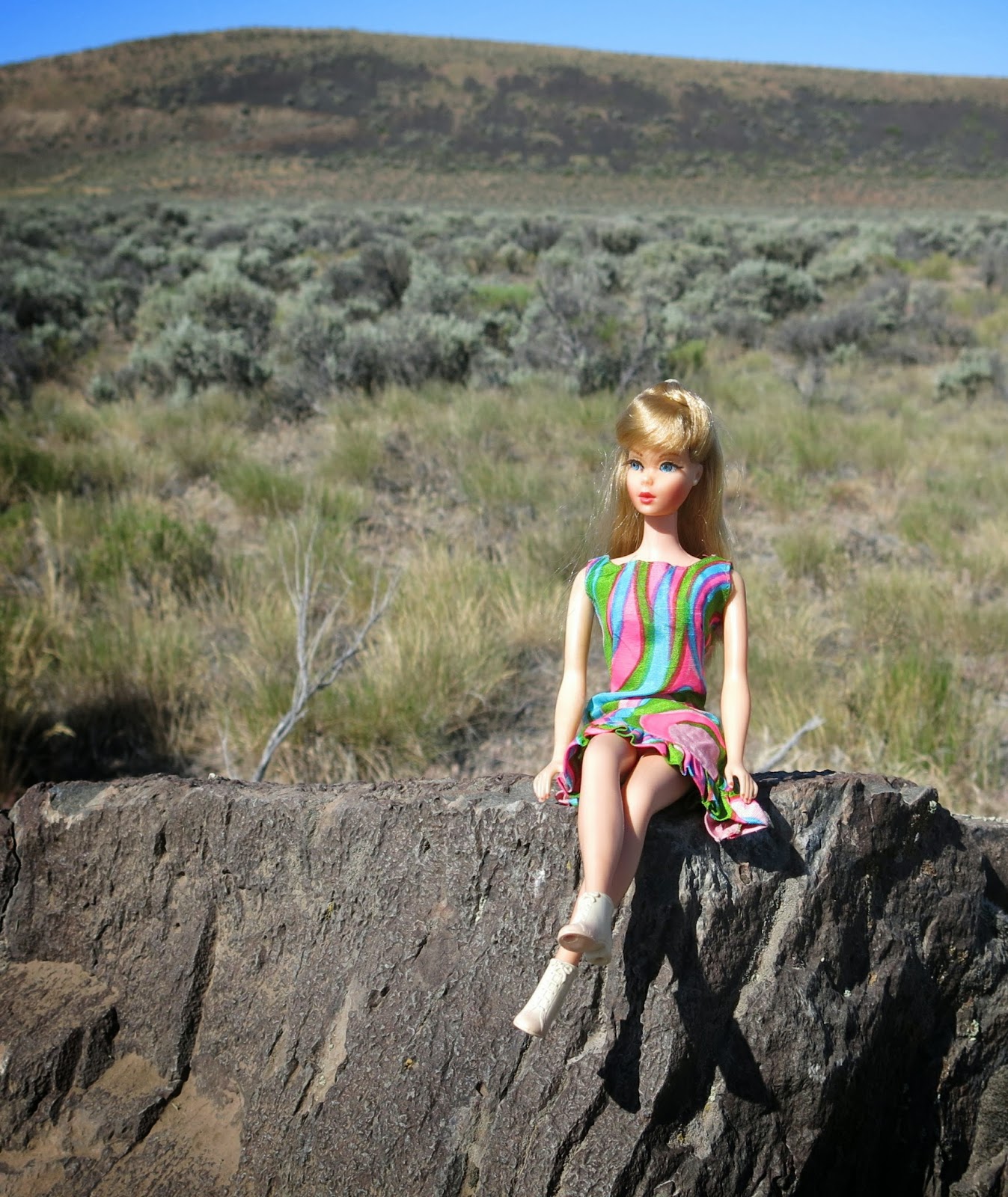 Pulling a house on wheels behind a 4x4 pickup, Barbie saw the most amazing scenery, an abundance of beautiful wild flowers,

and a variety of wildlife in their natural habitat. The tasty well planned home cooked meals and every comfort possible in a 23 foot travel trailer made this "mans" trip possible!

The first four nights were spent exploring Frenchglen, Malheur National Wildlife Refuge, and the magnificent Steen’s Mountains.  Even though the Mosquitoes were early (usually unbearable in late June and July), that didn't stop any exploring. 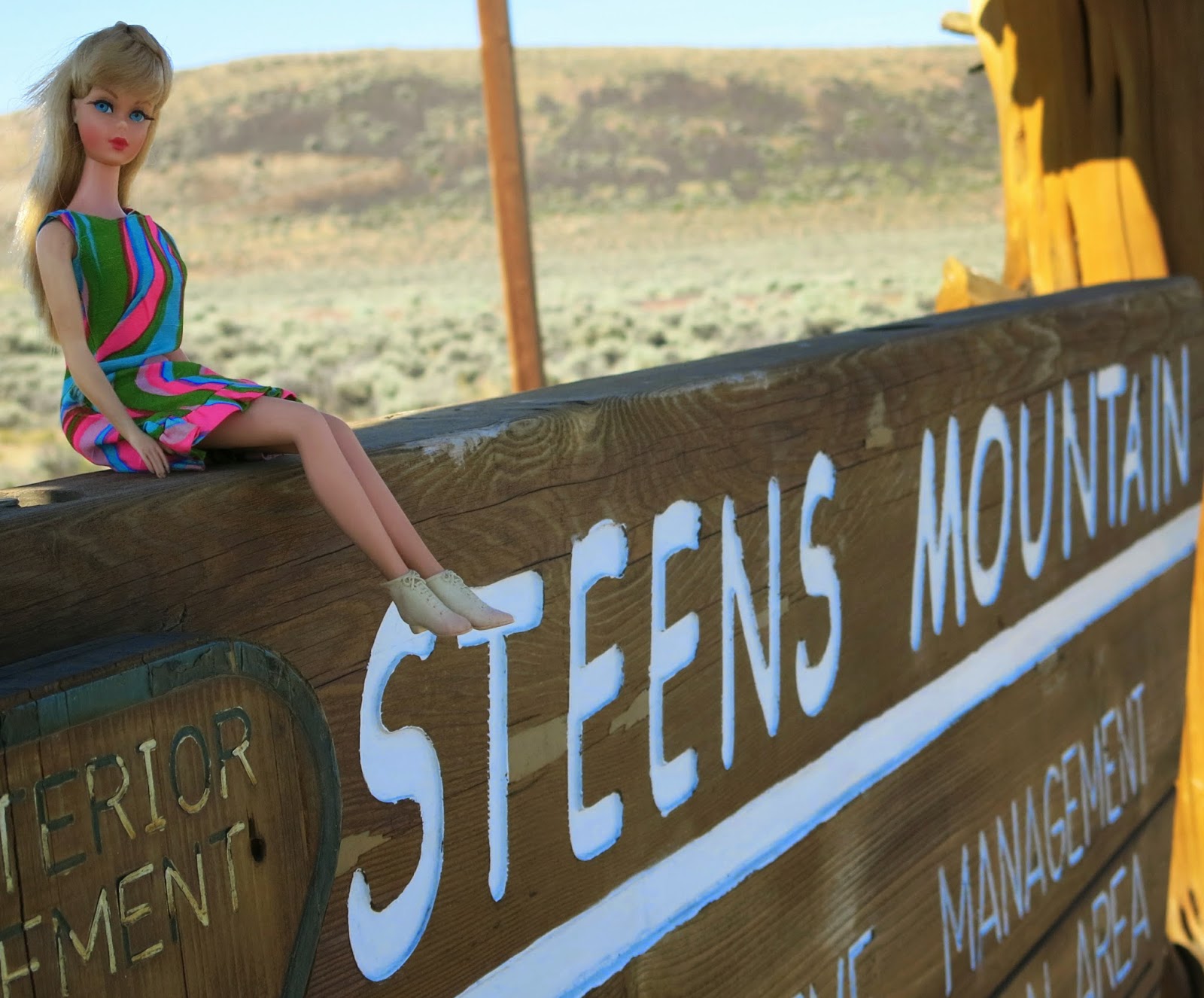 There were so many varieties of beautiful birds, too many to count, including a Golden Eagle that was sunning himself in the middle of the road (unfortunately, so amazed by the beauty of this majestic bird, no one thought to grab their camera!).

Much of the trip consisted of driving on gravel roads, through teeny tiny towns, gawking at the rim rock, or just waiting patiently for cows and their calves to yield the right of way. In this part of the country cattle share the road (open range) with vehicles. Every turn brought something unexpected, but very special.

The next two nights were spent at Hart Mountain National Antelope Refuge, which was established in 1936. Once on the refuge it didn't take long to spot pronghorns (antelope) roaming in a wide open desert that consisted mostly of sage brush, with a backdrop of rolling hills and Hart Mountain looming above.  This is definitely "big sky" country!

The house on wheels parked at a primitive camp spot that had two wonderful hot springs. The mosquitoes weren't much of an issue at this higher elevation, so it was a great time to do a little exploring on mountain bikes as well as some hiking.  Each day ended with a dip in the 100 degree water bubbling from below into the developed hot spring at Hot Springs campground.  The second spring is undeveloped and was almost too warm to linger very long, so Barbie just dangled her feet there.

You also couldn’t help but notice the comprehensive sign posted at the campground which detailed best practices in case of a rattlesnake bite.

The final leg of this journey consisted of driving down the other side of Hart Mountain, which was very steep and curvy.  The truck and trailer crept the last 2 miles, until it was safely off the slope.  After going through a lot of sage brush and farm land, still more small towns and a stop in Lakeview for gas, Barbie visited Fort Rock, a volcanic crater out in the middle of nowhere, for additional sightseeing.

The day ended in beautiful La Pine State Park in Central Oregon, which is nestled on the banks of the Deschutes River.  This is where the trailer parked for the final two nights of this fascinating journey.

The region around La Pine has so many choices for each day, but the one place that’s a must is Newberry National Volcanic Monument.  Besides all the hiking, biking, fishing and boating that's available, the area has many interesting places to see.

There is Paulina Lake and East Lake, both located at an elevation of over 6300 feet. Nearby is Lava River Cave.  At one mile it’s the longest lava tube cave in Oregon.   At Lava Lands Visitor Center you can drive to the top of Lava Butte Cinder Cone (5020 feet), or if you want to go even higher in elevation, you can drive to Paulina Peak (7984 feet), but it’s a very narrow and unimproved road.  Both offer very impressive views.  Another highlight is Big Obsidian Flow, which has over 170 million cubic yards of obsidian and pumice, and is the youngest lava flow in Oregon (1,300 years old).  It’s amazing to see the vast amount of obsidian piled up in one place.  If you like waterfalls, there are two completely different ones; Paulina Falls and Benham Falls, which are breathtaking and worth the short hike to each.  Newberry Volcano is the largest volcano in the Cascade Range, and there is much more to see than you will have time for in one entire day.

Exploring unconventional places can be one of the most relaxing, interesting, and truly memorable vacations.