Fifty years ago the extremely hard to find #1021 Skipper Holiday Party Set was released.  This fabulous 1965 set is almost identical to the 1964 #1021 Skipper Party Time Gift Set, but with a few exceptions.

The 1965 Holiday set featured a bend-leg Skipper doll dressed in her red, white, and blue nautical one-piece swim-suit instead of the red and white one-piece suit that 1964 set with straight-leg Skipper wore.

The 1964 Party Time Set was featured as "new" in the 1965 Mattel Catalog after it was released as a Sears exclusive in 1964.  But the rare 1965 set is not pictured in any of the catalogs (Mattel, Sears, Montgomery Ward, or J.C. Penney). Could it have been a small release intended for the Christmas holiday?

The 1965 set is much, much harder to find on the secondary market than the 1964 set.  But maybe you’ll be one of the lucky few this year, and you’ll find this half century old set under your Christmas tree!

Be sure to visit my web site www.MyVintageBarbies.com for more Barbie information!

In 1967 the very rare and lovely #3033 Beautiful Blues set was released exclusively by Sears. 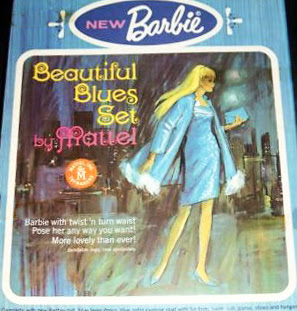 This magnificent set came with a twist ‘n turn Barbie doll that had long hair, with a portion pulled on up on top of her head and tied with a pretty orange hair ribbon.  She had real eye-lashes, and wore a two piece vinyl orange swim-suit with a one-piece fish-net swim-suit over it.

The one significant difference between this doll and all the other twist ‘n turn dolls that were released in 1967 was the striking powder blue eye shadow that Barbie wore in the Beautiful Blues Set. But, if you look closely at the picture in the Sears catalog, you will notice that the doll pictured does not show her blue eye-shadow at all, which of course was an error in printing. 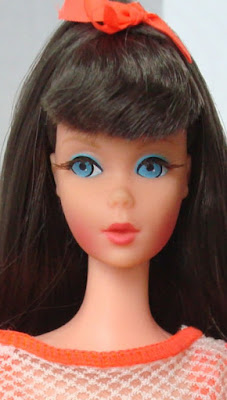 The set came with the doll and a stunning ensemble.  The collection featured a blue sparkle one shoulder cocktail dress accented with a white satin bow with white satin trim, along with a beautiful matching blue satin coat trimmed with white fur.  Completing the set were matching blue closed toe heels, and a blue clutch purse.  There was a plastic ‘X’ stand and little blue hanger included as well. 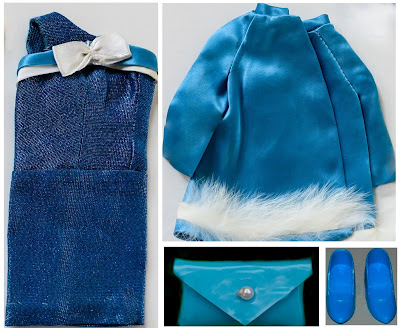 Originally this amazing 7-piece set sold for $5.97, but currently this highly sought after set on the secondary market commands hundreds of dollars to purchase.

Barbie of the Month: Growing Up Skipper and Growing up Ginger

Growing up Skipper debuted at the New York Toy Fair in February 1975.  The box she’s packaged in reads; “2 dolls in 1 for twice as much fun!”  She went from a “cute little girl” to a “tall, curvy teenager”, according to the packaging. 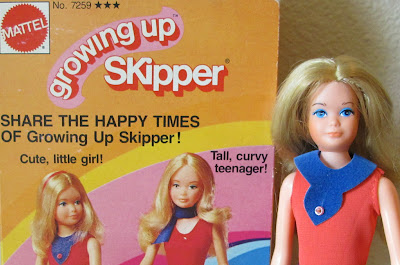 Once she was for sale in stores, newspapers all over the country had a heyday writing articles about this “Super Teen Skipper”.   Mattel received numerous letters from women’s groups and parents complaining about the doll and her ability to grow breasts. 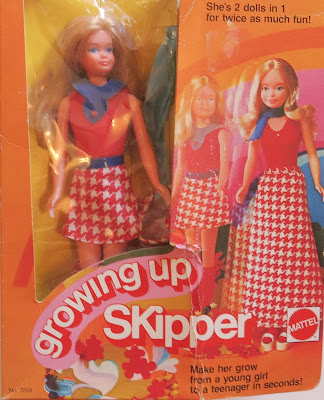 Even though these aren’t my favorite dolls in the Barbie line, I still enjoy having them as part of history in my vintage Barbie collection. 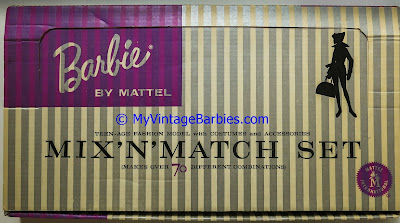 1960 was the first year Barbie gift sets were available.  There were three sets that year, and all are incredible!  They were the #856 Party Set, #857 Mix ‘n Match set, and the #858 Barbie Trousseau set (which was a double set).

Included in the #857 Mix ‘n Match set was a #3 or #4 ponytail Barbie doll, and everything Barbie needs to make 70 different combinations of fabulous outfits.  Barbie, dressed in her traditional striped swim suit and pearl stud earrings or gold hoop earrings, also had sunglasses and black open-toe heels.  These were packaged together with her pink booklet with her picture on the front.


In 1962 the set was available again, but with a #5 or #6 ponytail Barbie doll.  In this almost identical set she wore the same striped swimsuit, but a gold Barbie wrist tag was added (when found with a number 6 ponytail, she is in the red swim-suit).  The 1962 pink booklet featured Barbie and Ken’s photograph on the front. 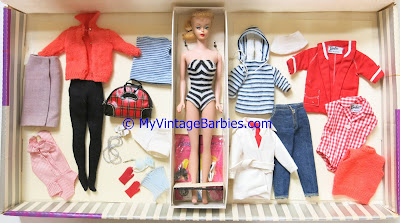 Interestingly, if you look at the Mattel catalog for these sets in 1960 and 1962, you’ll notice that in 1960 the photograph shows the blue checked #916 commuter set blouse rather than the red checked picnic blouse that the description below the picture describes, and what the set actually came with.  In 1962 Mattel corrected the catalog description of the set by describing these partial sets of clothing more clearly for the retailer to read (see picture and description below). 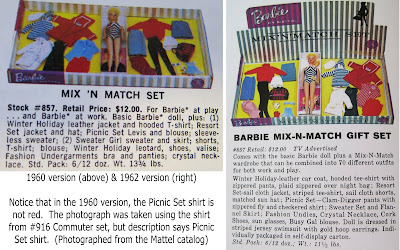 The 23 x 12 box is marked ©1959, 1960 Mattel, Inc, Hawthorne, Calif. Stock No 857 and originally retailed for $12.00.  Inside there is an attached plain white box which includes a box liner placed in the center of the larger box to fit Barbie.  Inside the larger box bottom is a yellow liner on which all the clothes and accessories were placed.

I’ve wanted this hard to find early set for quite some time, and was ecstatic when I finally found it!  I hope you find your dream sets too.