The Dramatic New Living Barbie was amazing!   She could tilt her head, bend her knees, rotate her wrists, had posable ankles (so she could wear flats and heels), could bend her elbows, swing her arms up and out, and swivel at the waist with this brand new style body!  With her posable legs, she could even do the splits!  She was available with blonde, brunette or red hair, and had real eyelashes.  She wore a beautiful gold metallic one piece swim suit with an orange fishnet cover-up that was trimmed in gold.

In 1971 her name was shortened to the "Dramatic Living Barbie" (they dropped the word "new" from the name on the box).  She was packaged in a new style box, and dressed in a polka-dotted swim suit with matching long wrap.

Besides the swim suit variations, the two dolls had one other distinct difference.  In 1970 Barbie had side glanced eyes, and in 1971 her blue eyes were center glanced.

In 1970 and 1971 Sears released an exclusive gifts set. The Sears Action Accents gift set came with a Dramatic Living Barbie doll.  There was another difference in this set.  The doll was marked with a "Japan" marking instead of the normal “Taiwan” mark.  She also had a deeper red hair color which was also slightly longer.  For detailed information on this set, click the link below:

In 1970 there was one other Dramatic Living Barbie released; Stock #1188, which exclusive to the Japanese Market.   For additional information on her, click the link provided:

This Dramatic Living Barbie doll is a must have in any mod Barbie collection! 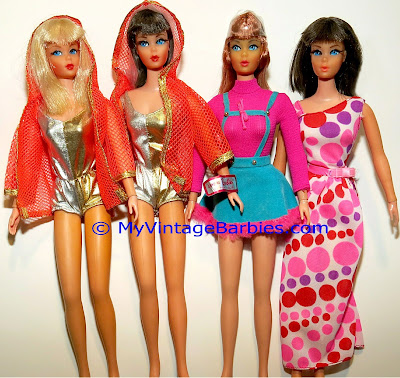