In 1971 Mattel released #1152 Live Action Barbie, as well as the much harder to find #1155 Live Action Barbie on Stage.  Both were the same doll, but Live Action Barbie on Stage included some extras.
With the 1970’s underway, Barbie and her fashions stayed in step with the contemporary fashions of the decade.  Instead of the typical swim-suit that many of the earlier dolls were packaged in, we saw more dolls dressed in trendy hip outfits in the 70’s.
Live action Barbie wore a pink and purple tie-dyed one piece jumpsuit, trimmed with a wide leather  fringed sash with a leather headband that she wore across her forehead. To complete her outfit she had two leather fringed wrist sashes.   She had blonde hair, real eye lashes, and blue eyes.

There were four different Live Action dolls released in 1971 and 1972: Live Action Barbie, Ken, P.J., and Christie.  They all came in cool, totally 70’s fashions with some type of fringe included in their ensemble. 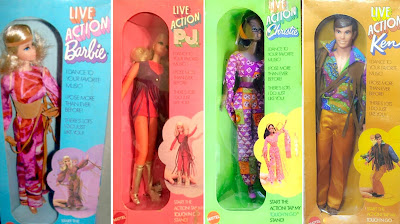 All the Live Action dolls that were sold separately from the Live Action on Stage package came with a Touch‘n Go posin’ stand.  All their bodies could dance to a beat when they were positioned on their stand.   All little girls had to do was move the stand to make them dance! The female dolls had a more active body than Ken.   Barbie, P.J., and Christie had bendable knees, elbows, and ankles.  Their waist could swivel, as well as their legs, arms, and neck.  Ken only had bendable legs and a looser waist.

The Live Action Barbie on Stage included Barbie, Ken, and P.J.  They were only sold in 1971, which makes them much harder to find on the secondary market (Christy never came with a stage.) The stage was motorized and included a remote control (batteries not included) which allowed the doll to dance to a fast or slow beat.  Included in the set was a 45 rpm two-sided record for each doll, and each had their own select set of songs on their record.  Live action P.J. came with a guitar as well.
﻿﻿


“I’m happy I’m Barbie” was the record that was included with Live Action Barbie. 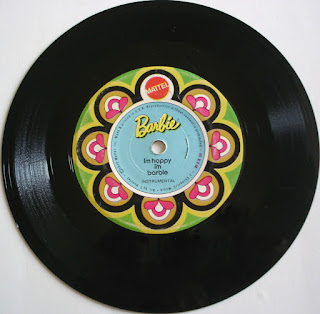 If you look closely at Live Action Barbie’s eyes, you will notice that they are very similar to the eyes of Walk Lively Barbie (1972).  You will see that Walk Lively has lighter eye makeup, shorter eyelashes, and her eye brows are a little further apart.  She also has a lighter shade of blonde hair.
If you compare the waist of Live Action Barbie to Dramatic Living Barbie (1970), one would think they were exactly the same.  But there is a difference in them as well.  Both have twist-n-turn waists, but Live Action’s is more flexible.
In 1973-1974 Mattel released a Live Action Baggie Version (#8588).  The company most likely had an excess of these dolls, so they sold them at a reduced rate in a baggie rather than a box.  The Baggie version did not include the stand.  There was a mail order version too, which did include the Touch and Go stand.
In 1971 and 1972 Sears released an exclusive gift set; Live Action P.J.  Fashion ‘n Motion gift set, which retailed for $8.99.  It included the doll dressed in her original outfit as well as an additional ensemble, Touch and Go stand, and two sided record that played the song “Hey Little P.J. Gal”
Here’s the song “Little P.J. Gal” for Live Action P.J.:
Play song "Little P.J. Gal"

Here are two commercials from 1971: 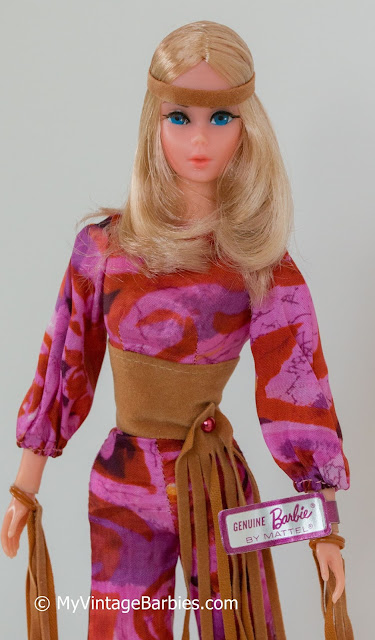 To find the Live Action Barbie on Stage still in her box would be considered a great find!   It’s easier to track down P.J. and Ken in their “on Stage” box than it is Barbie.  But I did find her, and I hope you do too!
Happy Hunting!