Barbie of the Month: Busy Barbie

In 1972 two quite different versions of the pretty Busy Barbie was introduced; #3311 Busy Barbie and #1195 Talking Busy Barbie. These dolls were unique because they had "busy" hands that could grasp various items.  Their hands can bend and turn at the wrist, and open, close, Grasp and carry.

There were seven Busy Barbie dolls made for the U.S. market.  Three could talk (Barbie, Ken, and Steffie), and four that could not (Barbie, Ken, Steffie, and Francie).   One additional Busy Barbie doll that was released at the same time was German Busy Francie (#3313),  who was available only in Europe.  She had the same body but a completely different head mold. 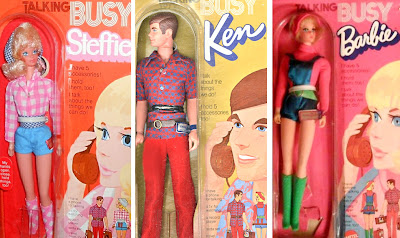 In 1971 a brand new advertising campaign began for new products that Mattel was planning to release in 1972.   They called that ad campaign “Surprising Barbie”.   Included in the campaign was a “Surprising Barbie” theme song that would be used for all advertisements in 1972.  Mattel thought that little girls would love the catchy tune.  The biggest surprise in 1972 was the introduction of the 1972 Busy Barbie line, but there were other exciting introductions as well.  A fabulous new Fashion Original clothing line was presented, as well as an entirely new line of clothing,  which was meant to compete with other lower cost brands on the market for the same sized dolls.  They called the new line “Best Buy fashions”, “high quality fashion at the lowest price ever”.  Each retailed for .55 cents.   In the commercial  Mattel also referred to some other added surprises that would be released later at the toy fair.
Here’s the link for that commercial for your viewing enjoyment!
Surprising Barbie Commercial 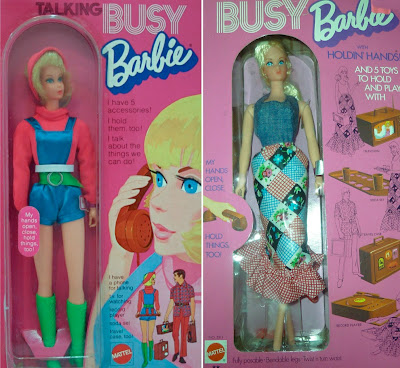 Busy Barbie was available for only two short years.  Consequently she is another pretty lady that’s a little tougher to find on the secondary market,  in mint condition and in her box, but I think she’s a must have for every Barbie collection!