I recently acquired a fun little Barbie item, a Dressed Bubblecut Barbie exclusively from the Japanese Market.
These dolls are very difficult to identify, unless they are still in their original box.
The Japanese market dolls were packaged in normal western style clothing as well as a western style box, with only two additional stickers affixed to the box that the U.S. boxes did not include.

The first sticker is found on the inside of the bottom box inside flap, where Barbie’s head would be positioned.  It is a white Tariff Stamp Sticker with black lettering.
The 2nd sticker is a KB sticker found on the top outside end flap of the box which also has the fashion number of the dressed doll.


Also in the box was a fashion booklet and stand.  The earlier dolls included a 2-piece black metal stand with plastic base with the lettering “Barbie” written on it.  The later ones had a gold one-piece wire stand.
A Japanese fashion booklet was also included with these dolls.  And I believe others may have included a western booklet. 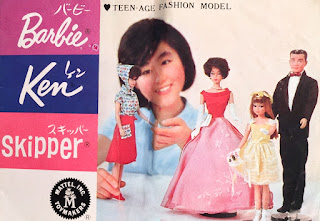 There are also rare boxes that had these western dolls in packages that were very similar, but the photographs on the box were Japanese faced dolls rather than Western faced dolls.
There is very little written about these dolls, and I’m still learning, but they are certainly something to look further in to, and even to acquire!
Let me know if you have any more information you want to share!
Happy Hunting!
Posted by Marie at 10:45 AM 4 comments: