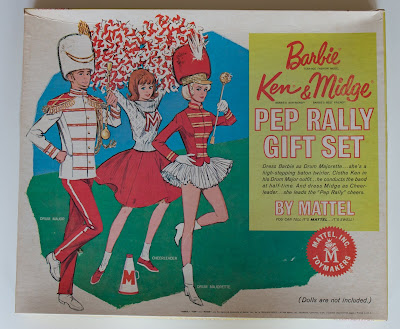 This fabulous gift set didn't come with dolls, but included three complete outfits for football season and a booklet.  #875 Drum Majorette, #876 Cheerleader and #775 Drum Majorette.  Barbie, Ken, and Midge were set for the big game!

Barbie wore a red and white drum majorette ensemble, which included a white skirt, red jacket trimmed in gold and silver, sheer tights, plush hat, white boots, white gloves, and she carried a gold baton. Ken wore a matching drum major ensemble. His included a plush hat, red trousers with a white stripe on the side, white jacket with gold and silver trim, white shoes and socks, and he carried a gold baton as well.  Midge was the cheerleader.  Her outfit includes a full red skirt and white sweater, emblazoned with the letter M.  She also wore white socks, red shoes, and carried red and white pompoms, and carried a megaphone for cheering. 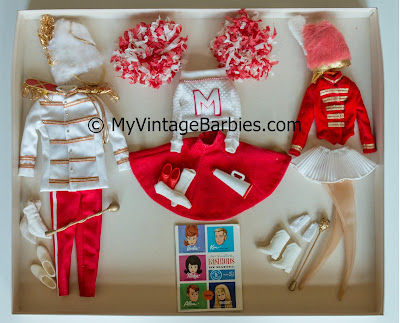 This darling set retailed for $5.97 in the Sears catalog, but the ensembles could also be purchased separately, which would be at a slightly higher cost of $7.04.

A year earlier, 1964, the #1014 Barbie, Ken and Midge on Parade was released.  This is the same set as the Pep Rally Gift Set, but it included all three dolls; Barbie, Ken, and Midge.  The set is shown in the 1964 Mattel catalog, but it was not available in either the Sears or Penney's catalog that year.

Interestingly, I did see the #1022 Barbie, Midge, and Ken Pep Rally Gift set" listed in the Sears Catalog in 1964 with a retail price of $5.87, but it was not in the Mattel catalog that year.

Since the Pep Rally Gift set was "new" in 1965, why would it be in the Sears catalog in 1964?  I'm thinking it was a printing error and the Barbie, Ken and Midge on Parade was supposed to be the one featured in 1964.  But anything is possible in Barbieland!


I love the gifts sets, and love collecting them.  I hope you find some for your collection too!

Be sure to visit my website for more Barbie!

Barbie of the Month: Barbie and Ken (Tennis) Gift Set 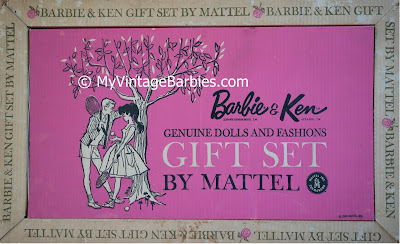 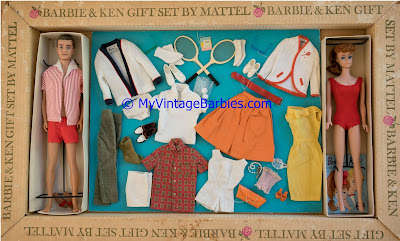 The clothing consisted of nearly the complete #941 Tennis Anyone ensemble: Jacket, socks, shoes, tennis book, sunglasses, tennis racquet, and tennis balls. The white tennis dress was replaced with a white scoop neck playsuit.  Ken had the complete #790 Time for Tennis ensemble: shirt, sweater jacket, shorts, socks, shoes, sunglasses, tennis racquet, and tennis balls.  Each tennis ensemble for Barbie and Ken include two tennis balls, but the gift set had a total of two.

The box is one of the bigger gift set boxes.  It measures 17 inches deep by 27 inches wide (for those of you wondering if you have room to showcase it!).  It has a blue liner to which the clothes are attached by white string.


This is a very difficult set to find, both complete in the box or the box alone!  It’s such a treasure once you acquire it.

Be sure to visit my web site for more Barbie!
www.MyVintageBarbies.com