The Austin-Healy was a British made sports car which was built from 1953 until 1972. There were three models built; the 100, the 3000 and the Sprite. Barbie's car was a 1962, two-seater coral colored BN7 3000 Mark II, made by the Irwin Corporation for Mattel. She looked cool driving down the road in this baby! Interestingly, it did not only come in coral with the turquoise seats, but was available with lavender and white seats, beige with white seats, and red with white seats, all of which are extremely rare. I believe the red version was not even released to the public. The original price for the "real" car in 1961-1962 was about $3,700.00 and today it sells for more than $50,000 in good condition. This lavender version of Barbie's car sold in its original box a few weeks ago for $307.00, which wasn't a bad price for such a rare color! 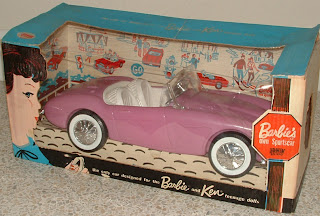 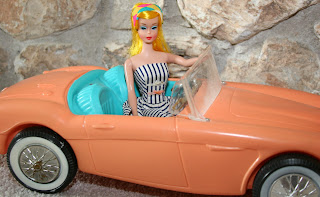 Standard coral and turquoise version
Posted by Marie at 8:02 PM

Email ThisBlogThis!Share to TwitterShare to FacebookShare to Pinterest
Labels: Austin-Healy