Check out Mattel’s newest high fashion Barbie doll!  This is the Hervé Léger by Max Azria Barbie doll.  She comes with two high end fashion ensembles which are made in the same factory as the Hervé Léger clothing line. And here is the best part, you can buy a matching ensemble in your size for yourself!


In 1998, Hervé Léger, a French clothing house, was acquired by BCBGMAXAZRIA Group (founder Max Azria).  The company was established in 1989 and has been a huge presence in the fashion industry, creating high end, contemporary fashions.
In 2007, BCBGMAXAZRIA reintroduced the Hervé Léger label, using their creative designs.  By 2008 the incredible fashions were shown on the New York Runway during fashion week.
This Gold Label doll, which was available for purchase on September 17, 2013 at BarbieCollector.com for $150.00, won’t be shipped until October 15th.  This is the same date she should be available at select Neiman Marcus stores.  The adult size matching outfits can be purchased at Neiman Marcus as well as Hervé Léger by Max Azria stores. 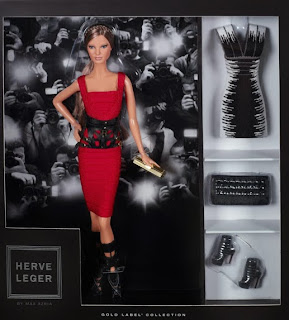 The set comes with the doll, two dresses, belt, black gladiator boots, open toe booties, and two handbags. There are no more than 9200 dolls produced worldwide.
Posted by Marie at 7:14 PM 2 comments:

One of the most beautiful places in Oregon is the picturesque Old McKenzie Highway (OR 242) in the Cascade Mountains. This scenic byway is open in the warmer months from about July through October.  During the winter months it is closed to motor vehicles when the first snow accumulates, but can still be accessed by snowmobilers and snow shoeing enthusiasts, cross country skiers, and hardy snow campers.  This scenic highway is listed on the National Register of Historic Places.  It starts just past the ranger station at the junction of highway 126 and 242, and ends at the quaint little town of Sisters, Oregon.

A few weeks ago Barbie made the trip.  She began her adventure driving the windy, narrow, evergreen canopied road.  At about the seven mile mark she made her first stop at Proxy Falls.  She couldn’t wait to hike the short (and easy) one and half mile loop trail which leads to both the upper and lower falls. 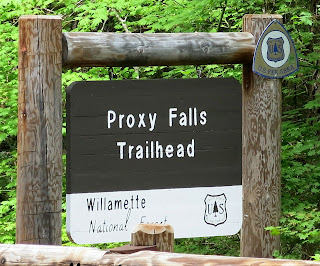 After trekking about three quarters of a mile through giant old growth trees and lichen covered lava rock in the Three Sisters Wilderness area (within the Willamette National forest), she reached the stunning 226 foot high upper falls, nestled in a forest of tall evergreens.

The water cascades over basalt columns which are covered with beautiful dark green moss.  The falls are fed by springs from the North Sister, which is the oldest of the Three Sisters peaks (North, Middle and South), and it is one of the largest in the Cascade Range.  It stands at over 10,000 feet high.
﻿﻿﻿﻿﻿

After Barbie took a few moments to enjoy all the beauty that was surrounding her, she was back on the trail hiking towards her next stop; the icy pool and lower Proxy Falls.  The upper falls is the most impressive, but certainly the lower falls is well worth the visit!
﻿

Back at her car, her drive continued until she reached the awe inspiring Lava Beds and Dee Wright Observatory. You can’t help but marvel when you approach the basaltic lava which spreads in all directions for miles.

The observatory (or the castle as some refer to it), is a lava stone structure built in the 1930’s by the Civilian Conservation Corp.   There are viewing ports inside the building which aim at specific peaks and volcanic craters.
﻿﻿

At the top of the overlook, which is at an elevation of over 5300 feet, there is a 36 inch bronze 360 degree site locater.  It points to and shows the elevation of the major peaks in the Cascade Range; The Three Sisters, Mt. Jefferson, Mt. Washington, Black Butte, Belknap Crater, Mt Hood, and others.  It is quite the vista!


After leaving the old McKenzie Hwy, Barbie made one final stop on her journey; Sahalie Falls.  It is one of the most beautiful waterfalls in the entire state of Oregon.  It’s located just off the road on highway 126 and it is a sight to be seen.

The volume of whitewater that runs over the falls year round is incredible! When it reaches the pool below and hurtles downstream, it becomes incredibly clear.

There’s a trail that runs along the McKenzie River to another worthy waterfall, Koosah Falls, which if time permits is also quite a nice hike.  Unlike the Old McKenzie Hwy, OR 126 is open year round (except for occasional closures due to heavy snow).  The view of the falls when shrouded in ice is one you will not soon forget.
Posted by Marie at 3:35 PM 1 comment:

The other day I was reminiscing as I was going through some of my daughters old Barbie dolls, which were neatly stored away (at my house!) all these years.  Being the organized child that she is, each one of her dolls were precisely dressed in his or her original outfit, just as she had received them, probably on Christmas morning or on her birthday.
To my surprise, she had the one doll from 1992 that I wanted to photograph for my web site. This pretty doll had crimped extra-long blonde hair that stretched all the way to her heels. She came in the trendiest multi-colored neon micro-mini dress, complete with a pink belt, pink shoes, pink earrings, and a matching hair ribbon.  She even came with five hair accessories and her own “Dep” styling gel.  And yes, I even found the gel!
﻿﻿
﻿﻿


Are you scratching your head wondering what makes this doll so special, and why I would want to photograph her for my vintage Barbie site?
Well…twenty-one years ago Mattel keyed in on what little girls wanted to see in a teen-age fashion doll.  Totally Hair Barbie (who was also available as a brunette and in a black version) became their top selling Barbie doll of all time.
﻿﻿


She was released in the early part of 1992.  By summer Mattel projected ten million in sales during the first year, with ten percent of Barbie sales coming from this doll alone, and expected one billion in overall Barbie sales.
She was the must-have doll of the Christmas season.  She retailed for $11.99 in the 1992 Sears Christmas Catalog.  Mattel heavily advertised this totally hot, totally cool doll on television and with print ads. Even though they didn’t quite make their projections, she was still the highest selling Barbie doll in history.  There were over ten million sold worldwide between 1992 and 1995.
There were other Totally Hair Barbie dolls in the line; Totally Hair Ken, Totally Hair Skipper, and Totally Hair Courtney, as well as the rare and very hard to find European dolls that are named Ultra Hair, rather than Totally Hair.  There is Ultra Hair Whitney, which uses the pretty Steffie face mold, and Ultra Hair Barbie.
﻿
﻿


Next time you go to my website be sure to click on Trivia, and you will find this blonde bombshell’s photograph!
Posted by Marie at 11:24 AM 8 comments:

In 1961 Barbie had juicy red lips with matching red nail and toe polish.  She came with a ponytail hair style or the “new” updated teased layered circle cut, which is referred to as the Bubble cut.
The Bubble Cut Barbie had blonde, brunette (raven), titian (red), or the extremely rare brownette (light brown) hair colors.  One other variation in 1961 was the hard to distinguish White Ginger Bubble Cut.


The White Gingers (stock #850) have a short tight bubble and used the thinner face mold as did all the other Bubbles from 1961.  They came on the hollow Barbie only body which included the small neck knob, with the marking ‘Barbie ® Pats’ Pend.©MCMLVIII by Mattel Inc.’.
Their eyes were a deep turquoise color with green eyeliner, and had pretty pink bubblegum lips (some of which have turned white over the years). Her lipstick didn’t match her nails and toes, as the White Gingers retained the red nail and toe polish like her counterparts.
These initial dolls were made out of vinyl that got sticky over time.   Therefore some have that “greasy face” syndrome.  Only the Gingers have the very light blonde hair color (like platinum), which over time usually have oxidized to a darker golden blonde.  The dolls with hair that is still the pretty light blonde color are much harder to acquire and are more valuable on the secondary market.
The White Ginger came in a Gay Parisienne Barbie ® box marked “White Ginger” on the end flap.  The box contained a box liner, white sunglasses with blue lenses, white pearl earrings, black open toe heels, black wire stand, and a pink booklet with a picture of Barbie and Ken on the front.

﻿﻿﻿﻿﻿﻿
It wasn’t until 1963 when Mattel introduced the official Platinum Blonde Bubblecut.  Keep in mind the Platinum’s are on the slightly taller Barbie/Midge marked body with a larger neck knob.  They have a poofier bubble, fuller face, and various colors of nail and toe polish.  Some of these light haired platinum’s have oxidized to a golden blonde over the years as well.
﻿
Now here are a few more specifics to throw some confusion into the mix. Mattel was famous for mixing things up. There are White Gingers out there that have blue eyes and blue liner rather than the standard deep turquoise eyes with green liner.  Also, there are 1962 Bubbles with Platinum hair on Barbie only bodies. These dolls came with a red swim suit.  Mattel used up old body parts they had around from prior years to unintentionally keep us collectors always guessing!
Happy Hunting!
Posted by Marie at 7:44 AM 4 comments: