Barbie of the Month: Twiggy


At age 16 Twiggy, now a British fashion model was called “the face of 1966” by the Daily Express Newspaper.  With her boyish thin build, crop haircut and heavy false eyelashes (wearing three pairs at a time), she represented the teens of the swinging sixties.  By 1967 she was in all the major fashion magazines, had her own line of clothing, and was modeling internationally.  She appeared on the cover of the Paris version of Vogue magazine, Elle, and others.  Considering her 5’ 6”, 112 pound frame it is amazing that she was even considered for modeling. Originally she planned to do head shots because she was told she was too short to model.  Interestingly she wasn’t just a model, but is considered the world’s first Super Model.

In 1967 (the height of her career) her popularity grew even more when she came to America to model and promote her new clothing line. She was so popular that Mattel released a Twiggy doll (stock #1185) after her.  This blonde short haired teen was the first doll released depicting a real live person. She was on the market for only two years; 1967 and 1968.

Often people get the Twiggy and Casey dolls mixed up.  Casey was released the same year as Twiggy.  They both are the same size and have a similar short hair style. They used the same head mold, have bendable legs, a twist ‘n turn waist, and real rooted eyelashes. What’s different between the two dolls? Twiggy wears much heavier eye makeup than Casey.  Casey also came in a choice of three hair colors (blonde, brunette and red), where Twiggy only had one color; blonde.


Twiggy came dressed in a yellow, blue, and green short knit mini dress, with matching yellow boots.  She wore her Twiggy wrist tag, came with a clear stand, and a little fashion booklet. 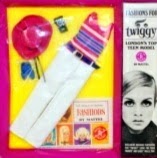 There were only four ensembles specifically packaged for Twiggy, which were all released in 1968:  #1725 Twiggy-Do’s, #1726 Twiggy Turnouts, #1727 Twigster, and #1728 Twiggy Gear (pictured right).  But since Francie was the same size, she had all of her clothes to wear as well.
I think Twiggy is a must have doll in any vintage Barbie collection.  She represents so much of what the 1960’s were all about!
Happy Hunting!
Posted by Marie at 8:52 AM