Barbie recently visited the happiest place on earth; Disneyland, in Southern California.  She went in late Fall, which was a perfect time to go.  There were far less crowds, and the weather was pleasantly warm.


Barbie went dressed in a 1990 “modified” Heart Family outfit which was released for Disney’s 35th anniversary.  When looking for the right clothes for her trip, I had searched my daughter’s old Barbie dolls and there it was. Disney Heart Family set, used, but completely intact.  I added a navy blue mini skirt to update the outfit, and she was off on her adventure.

Once at the park, besides all the amusing rides, tasty food, and entertaining performers, Barbie found some fascinating hidden gems that most people don’t realize are there.


Disneyland had its grand opening on the afternoon of July 17, 1955, to invited guests and media only.  The park only had eighteen attractions at the time, and many think that the Matterhorn Bobsleds were one of the original attractions.  In reality, the first “thrill” ride didn’t open until 1959, the exact same year Barbie debuted.  ﻿﻿ 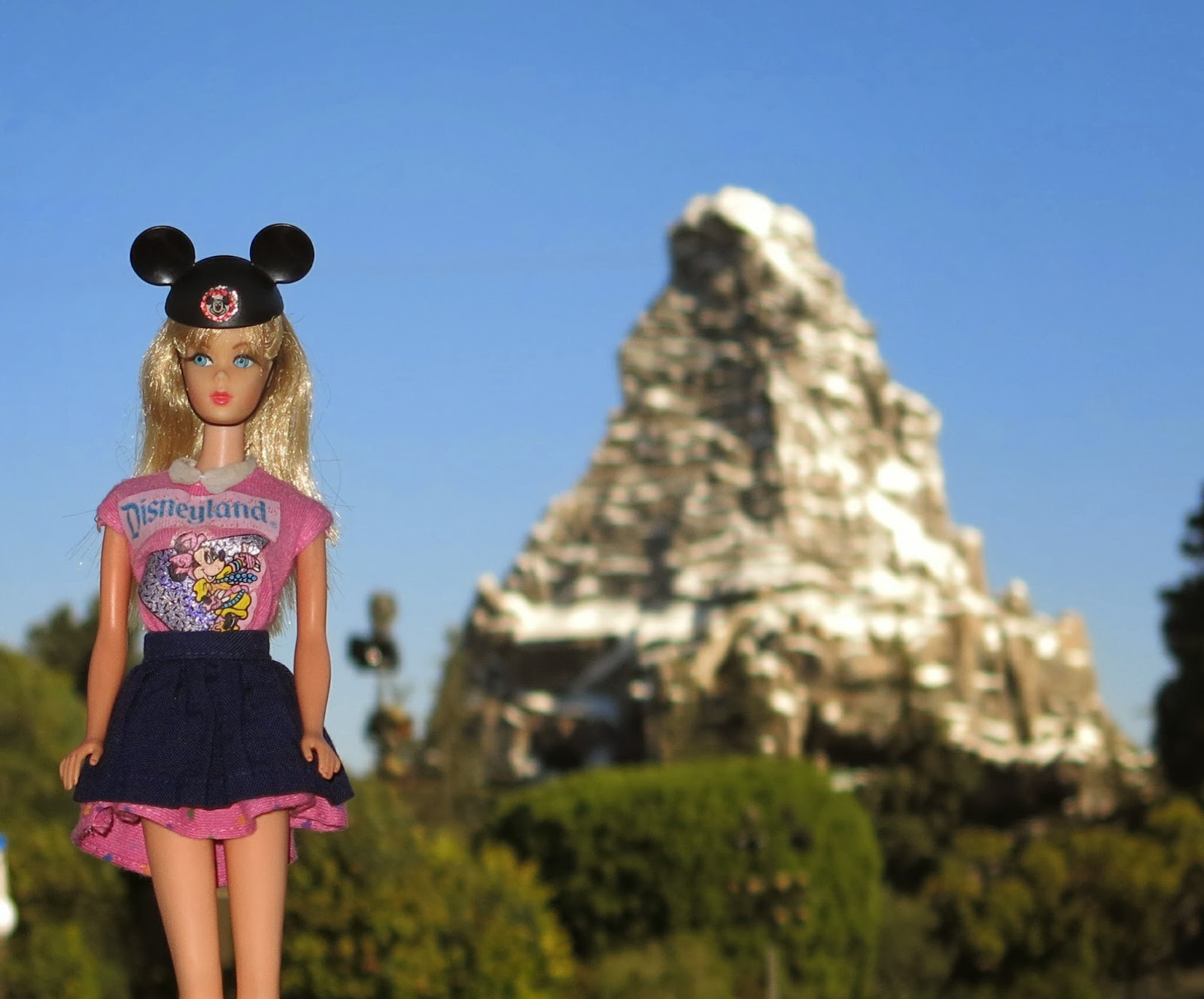 The structure has had several modifications throughout the years, but the 147 foot tall mountain still remains one of the most popular rides in the park.  The first tubular steel track coaster in the world zigzags throughout the bottom two-thirds of Matterhorn Mountain.  The top one third of the mountain houses a basketball court, which was built for Disney employees to use!


When you arrive at Disneyland, you first walk down picturesque Main Street.  It was built as a replica of Walt Disney’s childhood hometown of Marceline, Missouri.  You will even smell the scent of vanilla most of the year, except at Christmastime when it changes to peppermint!


Walt Disney also wanted his family dog Lady somewhere in the park.  You can find that famous pooch inside the Pirates of the Caribbean attraction.  He is the medium-size mixed breed poodle holding the keys in his mouth guarding the jail cells, as you approach the end of the ride.  I knew I would have liked that man!

As you stroll through New Orleans square you will come upon a door that has the number 33 next to it.  This is Club 33, which is a VIP private club with a very long waiting list (years), as well as very expensive initiation and annual fees.  Many celebrities and other distinguished guests have frequented the place. It’s the only establishment in Disneyland that serves alcohol.  However, alcohol is served at California Adventure, which is another Disney theme park.  It is a lot of fun and right next

The Disneyland Fire Department, which is located on Main Street’s Town Square, is one of the original attractions from 1955.  Inside there is wonderful memorabilia, such as the old horse drawn fire wagon that was used during the first 5 years, taking guests up and down Main Street.  Also since opening day in 1955, the Disneyland barbershop quartet still performs several times each day in front of the station.  Above the fire department there is a small apartment where Walt Disney would stay when he visited the park. If the light was on, that meant he was on site.  Today, since his death, it remains on all the time.


The last little tidbit of information that you might find interesting as you stroll the streets of this happy place is in Sleeping Beauty’s Castle, on your way to Fantasy Land.  Look down at the floor and find the spike. It marks the exact center of the park (well, that was until Mickey’s Toon Town was built!).


If you’re looking for some vintage Disney clothing for your dolls, you’ll have to look past the vintage years to the 1980’s and 1990’s and beyond.  For some reason, Barbie and Disney didn’t team up until then.  In 2005, for Disneyland’s Golden anniversary, the “Barbie Then and Now” doll debuted.  The 1955 “Then” doll was dressed in a “Mouseketeers” outfit, which is the outfit that was worn on The Mickey Mouse Club that premiered in 1955.