Barbie of the Month: Funtime Barbie and the Gang

Funtime Barbie, Ken, and Skipper are the three Funtime dolls that were sold in Europe and Canada in 1975 (boxes marked 1974).

The beautiful #7192 Funtime Barbie is made from the true Barbie head mold.  She has long blonde hair, bendable legs, and a twist ‘n turn waist.  Her hair is parted on the side with two pony tails. 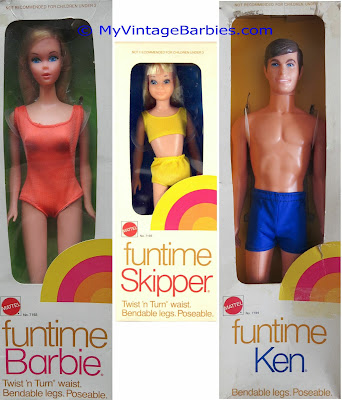 There is one additional Funtime doll with a darker rose colored box, who's name doesn’t appear on the back of Barbie, Skipper, and Ken’s box simply because she was only released in 1976.  She is #7381 Funtime Skooter.  This cute redhead with a twist-n-turn waist and bendable legs wears a blue two-piece swim-suit.  She is the hardest of the four dolls to locate.


Sold alongside these dolls in 1975 were Funtime sets, advertised as “today’s teens in outdoor scenes”.  I have not been able to locate a picture or even a description of these outdoor sets at the time of this writing.  If you have anything to add, please let our readers know!

Barbie, Ken, and Skipper were only available for two short years and Skooter for one year.  Since you could only get them in Europe and Canada, they are always much more difficult to find on the secondary market.